What is a “Masterpiece”?

UCLA musicologist (and friend of the blog) Robert Fink tagged me in a link to an essay about the watering down of the word “masterpiece.” As a lover of language, I do mourn the loss of specificity of certain words. Even though I acknowledge that language changes (and that it has to), I love the 18th century definitions of “sublime” and “picturesque,” and I wish that the former still conveyed a sense of overwhelming vastness while the latter still connoted variation and interesting juxtapositions.

But while Terry Teachout claims to be defending a dictionary definition in his article “‘Masterpieces’ Without Masters,” his sense of the word is tied up with a lot of Romanticized ideas of art and its production. And by “Romanticized,” I do mean that his way of addressing this topic is filled with ideas that originated in the 19th century. I have two main problems with Teachout’s essay: his rigid division between “popular culture” and “high art,” and his idea that a masterpiece must by definition exclude collaboration. To support this second point, Teachout makes many erroneous assumptions about how works of art, particularly classical music, are created.


First, though, there’s a problem with the definition of “masterpiece” that Teachout chooses to defend:


I ran across the definition of “masterpiece” found in the Cambridge Academic Content Dictionary: “Something made or done with great skill, esp. an artist’s greatest work.” This is the usage with which educated people over the age of 50 are most familiar.

As this is a blog about clichés, I feel compelled to point out that he did indeed use the oft-derided “Such and Such Dictionary defines ‘masterpiece’ as…” cliché! Anyway, he’s making the self-centered assumption that the definition he’s most familiar with is the real (or better) definition. But as Brian Upton commented on Robert Fink’s Facebook post:


Nothing should be called a "masterpiece" unless it is the product of a journeyman completing his apprenticeship as a member of a craftsman's guild. The modern use of the word to praise random artistic works is an abomination. Often such works are created merely to satisfy the individual whims of the artist with no regard for the established standards of the craft.

Upton is correct; Teachout’s usage is already a watering-down of an even earlier sense of the term. Complaining that meanings should be fixed at the time when you learned them reveals a lack of perspective and is just plain curmudgeonly.

On to Teachout’s distinction between different types of art. Throughout the article, he displays a snobbery that is itself a classical music cliché, but it’s most blatant when he talks condescendingly about pop culture:


[T]his shift [in the meaning of “masterpiece”] is not merely a function of our increased willingness under the aspect of postmodernity to take the fruits of popular culture as seriously as we do high art.

Not only is there a distinction between “popular culture” and “high art,” there’s the underlying assumption that one should not take pop culture as seriously as high art, and only postmodernity has allowed us to entertain the notion to do so. Teachout tap dances around this point quite a bit:


It may well be that our popular art is on balance of higher quality than the “serious” art of the present moment. True or not, a case can certainly be made that the best popular art has long aspired to, and often attained, a degree of aesthetic and emotional seriousness that is comparable to all but the greatest works of high art.

So, he’s willing to admit that pop culture can be good. Really, really good. Almost as good as real art, though not the very best real art, since that’s untouchable. Again and again, he keeps writing as though the division between popular and high art is an actual thing that everyone agrees upon.

But it’s not. It’s an artificial construct.

In my previous post, I mentioned a bit about how the distinction between “high” and “low” coalesced in the 19th century as a way for people to distinguish themselves according to taste, a necessity in a society where aristocratic privileges were waning. People were becoming less bound by the class they were born into. They could better themselves through education and demonstrate their status by their tastes. When Teachout writes, “[Good works] are, in the poetic sense, elevated, and to experience them elevates us,” he is borrowing the language of moral uplift from the 19th century to signal his own education and social status. (People who have studied history, however, can see right through him.)

If some popular culture can provide the same effect as the historical masterpieces, then, why doesn’t Teachout admit that they are also masterpieces? This is where he explains his idiosyncratic sense of the term:


A master was an artist ranked among the outstanding figures in his medium, a creator of all-encompassing technical skill and, even more important, a uniquely personal, immediately recognizable creative vision…. [T]he individuality of such artists was already acknowledged as central to their significance, and it became paramount once it was taken for granted that a truly great painting or sculpture would always be the unaided work of the artist who signed it. [Emphasis mine]

No. This is not true. I am not an art historian, but I’m pretty certain that the masters of visual arts often employed apprentices who assisted them in their work.

I am a musicologist, and I can tell you that what Teachout describes is not the case for the music he ascribes this to. Music as a “uniquely personal” “creative vision” really came into being around the time of Beethoven—again, this is a nineteenth century idea. Before that, music could be entertainment, it could be suited to a purpose (such as worship or work), it could serve to glorify a patron, but there wasn’t such a singular focus on personal expression as music’s primary function. 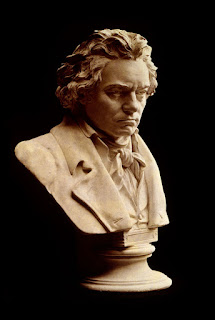 The way in which classical music history focuses on the composer feeds fantasies like Teachout’s. The Romantic movement placed a lot of emphasis on the individual, and histories written since then reflect this. Nineteenth-century historian Thomas Carlyle even claimed that “Universal History consists essentially of [Heroes’] united Biographies.” For music, the “Hero” is the composer, so the way we often receive music history is as a series of great composers.

Even in the 19th century, though, music is not the “unaided” work of the composer. One example that comes to mind is Felix Mendelssohn’s violin concerto, one of the most performed pieces in the repertoire. Teachout, like many other people, would probably consider it a masterpiece. But even though Mendelssohn himself played the violin, he still relied on feedback from his friend Ferdinand David, who played the solo at the concerto's premiere. It took Mendelssohn six years to complete the concerto, and the letters sent between the two men reveals just how much they collaborated.

It’s not just Mendelssohn. Johannes Brahms’s violin concerto was shaped by input from Joseph Joachim. And it's not just concertos. When you look into the correspondence of composers, you’ll find that they were constantly bouncing their ideas off their friends, writing about their current projects and asking for help solving some compositional issue. And that’s just the collaboration that was recorded! There were salon gatherings, chamber music evenings, moments where Robert and Clara Schumann sat together at the piano, all kinds of conversations about music that were never written down yet affected the notes in the scores we have today.

Teachout says that Beethoven didn’t use an orchestrator. Well, George Gershwin did, at least for his masterpiece Rhapsody in Blue. Maybe Teachout would exclude that, though, since it happened after the advent of Hollywood (his arbitrary demarcation of when popular culture started, which is also not supported by history). Going back to Beethoven’s time, I think Teachout might be surprised about the role of copyists, and how much interpretation was involved in making a composer’s hand-scrawled score into legible parts (particularly in the case of Beethoven!).

There are many other flaws in Teachout’s reasoning. He cites a few ballets as “masterpieces,” and they are among the most collaborative artworks created. I don’t even feel qualified to point out the number of popular music works that were, in fact, the expression of a singular vision of one individual, so perhaps you can enlighten me in the comments.

In any case, Teachout’s definition of “masterpiece” is not as widely accepted or as historically valid as he believes it is. Musicologists do have to shoulder some of the blame for his misconception, given the historical emphasis on The Composer. Music is, and has long been, a collaborative effort, and history is richer when we examine the many roles played in bringing it into existence. History is also richer when we don’t cling to artificial constructs of “high” and “low” art and justify them with circular reasoning.

Thank you AGAIN to Robert Fink for proposing this article!


Source:
“‘Masterpieces’ Without Masters” by Terry Teachout in Commentary Magazine,
https://www.commentarymagazine.com/articles/masterpieces-without-masters/
Posted by Linda Shaver-Gleason at 8:02 AM