In looking for subjects for this blog, I often rely upon my friends on social media. More people encounter more articles (obviously), but I also appreciate that they possess different knowledge than I do and therefore spot problems that I would probably miss on my own. They also tend to be the type of people who can’t stand when someone is being wrong on the internet and will post that wrong thing to social media so we can all share in the wrongness of the thing. Without that trait, my blog probably wouldn’t exist.

So, when I encountered this post in my feed from UC Riverside musicologist Byron Adams, I had to investigate further: 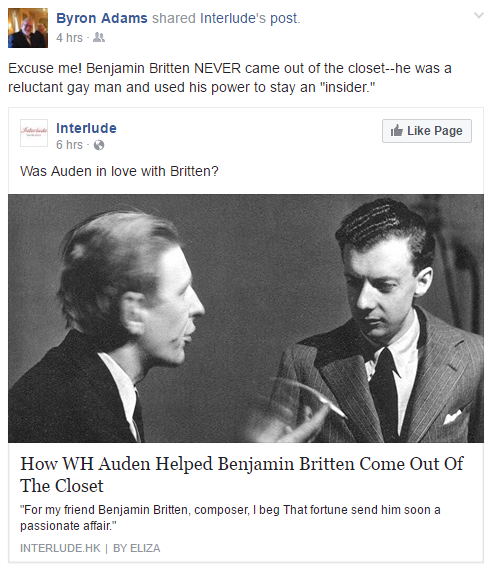 I asked Dr. Adams to point me toward some context, and he recommended Philip Brett’s essay “Music, Essentialism, and the Closet” from Queering the Pitch: The New Gay and Lesbian Musicology, which is available on Google Books.

While investigating the initial link from Interlude, however, I noticed a major discrepancy between the headline listed on Facebook (“How WH Auden Helped Benjamin Britten Come Out Of The Closet”) and the headline of Georg Predota’s article in the link (“Coming out! Britten, Auden, and Berkeley”). So, my blog post is going to address two separate issues, both of which are timely: 1) historical treatment of LGBTQ+ figures, and 2) the spread of false information through social media.

I’ve addressed LGBTQ+ composers on this blog before, in pointing out how the myth of Tchaikovsky’s suicide attempt reinforces the idea that being gay deserves punishment. I mentioned that most classical music audiences of the 20th century were uncomfortable with homosexuality, and that affected (and continues to affect) the way LGBTQ+ composers are presented. But even I was oversimplifying when I wrote that. Even though the 21st century is more welcoming of a broader range of sexual identities, it is still very difficult to address the sexuality of historical figures because this aspect of their lives has been hidden from public record—often by the person themselves.

American society today (at least, the one I operate in) generally promotes self-expression, being true to yourself, “you do you,” etc., but that is not a universal value. It certainly hasn’t been the case for most of history. While today many segments of society encourage LGBTQ+ people to “come out” and embrace their sexual identity (as it should—there’s a lot to be gained from representation), it would be wrong to impose that standard on people of the past. “Coming out” has historically been quite dangerous—and to many, it still is. So, there’s a problem with a headline that implies that Britten coming out of the closet is an unqualified good thing. Such an attitude erases a history of struggle.

But Britten never really did come out of the closet. He was gay, and he had a long-term relationship with his partner/muse, tenor Peter Pears. Britten’s sexuality was an “open secret”: known by many, but never publicly acknowledged (much like, say, Anderson Cooper until recently). As Brett explains in his essay,


His not acknowledging his homosexual identity in so many words, though it was universally known by some sort of bush telegraph, allowed him to maneuver effectively in British society…. [I]t gave him social and business advantages, allowing him to pursue a highly successful career as an entrepreneur, to be on warm terms with the royal familv, and to collect his nation's top set of honors (18-19).

If Britten admitted to being gay, he would be considered a sexual deviant and a criminal. By never making that aspect of his life public, he could lead a fulfilling life. If Britten did that today, no doubt some would consider him dishonest or even hypocritical, denying his true identity for his own benefit. That would be unfairly expecting him to conform to today’s standards.


Britten tapped a peculiar characteristic of British society that allows any kind of social deviance and ambiguity so long as it is not named, is not published, and does not make claims against the behavioral norm (19).

Not only is Britten from a different era, he’s from a country that has historically encouraged emotional restraint. Britten was playing by a different rulebook, one in which the public and private lives were considered separately. So long as he acted properly in public, he was an acceptable public figure. As Britten scholar Imani Mosley reminded me, this British tendency to overlook private deviance extended beyond sexuality: Britten was also a pacifist, but he likewise did not draw attention to his politics. His colleague, composer Michael Tippett, was more outspokenly pacifistic, and was consequently imprisoned. (Tippett was also gay and, unlike Britten, was as open about it as he could be without being illegal; he came out publicly soon after the repeal of the Labouchere Amendment in 1967.)

One of the biggest arguments in favor of public figures coming out of the closet is visibility, showing the world ways that LGBTQ+ people contribute to society. Their contributions prove that their so-called deviance is not harmful and paves the way for greater acceptance in the future…at least, that’s a theory that seems possible now. But Britten would not have been redeemed by his music. For all that Alan Turing contributed to computer science and the British war effort, his society destroyed him for being gay. No doubt Britten would have faced a similar fate.

So, it’s disconcerting as a historian to read Predota’s article presenting “outing” as a positive thing, as though Auden was doing a good deed by trying to provoke Britten to admit his sexuality. Even today, coming out is a sensitive issue, to be handled differently by individuals according to their personal circumstances. It has never been as simple as “Closeted = Bad, Out = Good.” Auden made Britten extremely uncomfortable and disrespected his personal boundaries, behaviors we shouldn’t applaud.

Besides, there’s some language slipping that occurs in this article, and it ties in to my other big point. Predota quotes Auden as saying, “we tried to bring him out,” and while there are layers of meaning to that statement, bringing Britten “out” to gay venues is not the same as bringing him “out” of the closet. But the headline implies as much when it captures the reader’s attention with “Coming out!” punctuated with a cheerleading exclamation point. Then, on Facebook, it becomes “out of the closet,” implying that Britten was publicly gay, which is false.

After the presidential election, there have been many articles about the role that social media plays in people’s perception of the news. Much of the focus has been on fake news sites, but even genuine news can be obscured by misleading headlines. In this case, even though Predota never specifically says that Britten was publicly out, nothing in his article would disabuse readers from the idea that was shaped by the Facebook headline. That is, if they even go so far as to read the article—for many, the headline is all that they see.

Turning away from Predota’s article to my own work, for which I have data, I know from my stats that of the people who saw my Facebook post on my previous update, 8.1% of those impressions converted into link clicks. Even if I include the “other clicks” (people clicking for more info about my page and so on) and assume that 1 click = 1 person (which is generous), that means that at most 18.4% of people who saw my post got more information about it; 81.6% saw only the headline and a bust of Beethoven.

Unfortunately in this case, I chose a bad headline. Early in this blog’s life, I decided to make every post title a question (there was some early installment weirdness during the first month). I thought it would be appropriate for a blog debunking myths to follow Betteridge’s Law of Headlines: “Any headline that ends in a question mark can be answered by the word no.” The problem is that the headline I chose for my most recent post, “Why is modern music so ugly?” isn’t a yes-or-no question, so it can’t follow Betteridge’s law. Instead, I had a headline that begged the question of whether modern music is indeed ugly.

From what I can tell, most of my readers understood what I was trying to do, and got that my “Make Classical Music Great Again!” subtitle was facetious. But not everyone who saw the headline was a reader. This became clear when my post made it to the r/musicology subreddit, where some commenters negatively reacted to the title question and clearly didn’t read further. (There were some people who did read the article and just disagreed with me. I’m fine with that.) So, because I tried being clever but failed to appreciate how headlines lead separate lives from their articles, now my name is attached to a question with a premise I reject. Oops.

Just hours before I planned to publish this post, I came across a more pressing example of a divorced headline obscuring the truth:

Pay ATTN to this new pattern from CBS News of taking inflammatory bs from Trump & PHRASING IT TO READ THRU AS FACT. Moonve$ telecast this! https://t.co/9RVcf7QRy3
— Only4RM (@Only4RM) November 27, 2016

While the CBS News headline is accurate inasmuch that it states what Donald Trump said, it does nothing to indicate that his claim is false, so anyone reading just the headline (which is a majority of the people who see this Tweet) will retain Trump’s message with no critical context.

Bringing it back to Britten—the way Predota’s article circulates, with a headline and a picture, people are going to be under the impression that Britten was out of the closet, and that Auden helped him get there. While I strive to make today’s society one where everyone can be free to express their sexual orientation, I also think it is important to understand why some LGBTQ+ people in history chose to be closeted—not to judge them by our standards, but to understand history in context.

The fact that Britten (and others) deliberately chose to hide his sexuality raises another issue for historians: If he never publicly admitted to being gay, who are we to out him? Shouldn’t we continue to be discreet about it? If knowing his sexual orientation doesn’t change a single note of his music, why should we care? I have heard and read variations of this last question among classical music fans who wonder why we pay attention that aspect of LGBTQ+ musicians’ identities:
This is another manifestation of classical music audiences tending to be more conservative than the musicians they support. Some prefer not to be reminded that homosexuality exists, and some willfully ignore how the world has been openly hostile toward LGBTQ+ people. At the very least, they see sexuality as something separable from a person’s identity, not a contributing factor to it.

In my opinion (which is not universally shared by musicologists), the way we do history is ultimately determined by our own society. So, while we should strive to understand the cultural factors that led Britten to choose discretion, we are not bound by them. Outing Britten now makes contributes to visibility and representation of LGBTQ+ musicians in our own time. It is important to recognize the specific challenges faced by minority groups, and in the case of Britten, understanding his homosexuality in context affects our interpretation of his compositions. We can celebrate Britten as a gay composer while understanding why he assiduously avoided that label; studying history allows us to appreciate such nuances.

Thank you to Byron Adams and Imani Mosley for context and feedback on this post!

Sources:
“Coming out! Britten, Auden, and Berkeley” by Georg Predota, on Interlude
http://www.interlude.hk/front/coming-outbritten-auden-and-berkeley/

“Music, Essentialism, and the Closet” by Philip Brett, from Queering the Pitch: The New Gay and Lesbian Musicology (2006)
https://books.google.com/books?id=y9rOaGO03UAC
Posted by Linda Shaver-Gleason at 5:17 AM