A side note before I get into this post: I’ve recently received some unfortunate medical news that will probably affect my ability to update this blog. In a previous post, I’ve mentioned that I have cancer. A few weeks ago, we learned that it has spread to my brain, and that I’ll be undergoing full brain radiation (starting this afternoon!), which will affect my short-term memory and ability to concentrate. In the future, I hope to work on writing with the extra mental challenges, but in the meantime, even just finding out about the cancer spreading has made it difficult to focus.

…Which is why I haven’t updated for a while, despite there being plenty of musical misconceptions to clear up. I’ve actually had two potential posts on my agenda for over a week: a take-down of a “new” (actually just recirculating) theory about Beethoven’s infamous Immortal Beloved, and a Twitter conversation I had last week about whether classical music can be considered political (my stance: Of course it’s political!). I’m still planning to post about those, as I think they’re both interesting and important. But what ultimately motivated me to update the blog today was a cartoon:

I encountered this comic on Classic FM’s Facebook page, and the comments are disturbing. There are two main interpretations of Classic Jenny’s comic, and honestly neither sits well with me. The first is a more positive spin—that over time, the rules have loosened, allowing for more freedom of expression and more abstract thought (and inviting different types of people into the composition process).

The second interpretation is much more common among Classic FM fans, based on the comments on the Facebook post—that this comic depicts the decline in music education over time. That interpretation, coupled with the conspicuously non-white, potentially non-male figure in the final panel, makes for a terribly racist statement, and I sincerely hope that’s not what the artist intended. (EDIT: It isn't. See addendum below.) Yet that’s the way many people are comfortable reading it.

I’m only going to spend one paragraph discussing why the second interpretation is offensive and why many classical music fans would be conditioned to see the comic that way: In other posts (here and here) I’ve pointed out how Classic FM uses social media to make their listeners feel superior about their choice of music. They’ve been primed with an “older = better” mentality, so even someone who expresses their love for the Romantic period (ostensibly depicted in the third panel) would still be inclined to think the first panel depicts an ideal that we’ve fallen away from. That desire for flattery (“I’m special because I appreciate the old stuff!”) is so powerful that it causes many to not even see the racist implications of the final panel—and honestly, that’s me being optimistic. I’m just hoping they overlooked it, rather than outright agreeing that music is worse when women and people of color are involved.

Yet the first interpretation, the one I hope the artist was trying to make, has many problems that may be less obvious. There are nit-picky issues: The cartoonist depicts each panel as a century, but the dates don’t really line up. The dialogue doesn’t even line up for the rough “Baroque-Classical-Romantic-Modern” breakdown she’s alluding to. In the third panel, the Liszt-like figure is questioning tonality between 1800 and 1900, but most of that century still operated in a tonal idiom (that is, the idea that pitches relate to each other in a particular way, with some pitches more stable than others. Tonality makes a scale feel “finished” when you get back to the original pitch). It’s hard to pinpoint when tonality “broke down;” it’s fair to say that Liszt stretched it, but most associate the atonality and the “emancipation of the dissonance” with Arnold Schoenberg and his students in the early 20th century. As for the “What is music?” question in the final panel, that’s more associated with avant garde scene in the mid-20th century, with ideas like musique concrete and John Cage’s 4’33”.

In the cartoonist’s commitment to making each panel trim the dialogue of the previous one, the second panel is rendered nonsensical: “What is the most effective method of texture in tonal music?” In music, texture refers to how the different voices/parts/lines of music are combined. There’s plenty of jargon associated with this concept—if the parts all move together, chord by chord, it’s homorhythmic; if there’s a single melody with chordal accompaniment, it’s homophonic; if the different parts have independent melodies that intertwine, it’s polyphonic (which is mentioned in the first panel); and so on, causing a lot of confusion, even for music majors. When I write program notes for people who may not have musical training, I describe a texture as “thick” or “thin” based on how much activity there is and whether you can hear individual lines. So, “method of texture” as a phrase doesn’t really work (it’s trimmed from “method of voicing through polyphonic texture”), and there is no one “effective” method or texture for everything. The dialogue sounds nice and technical, but it’s meaningless.

But for me, the problems start with the second word of the title: “evolution.” It has nothing to do with science vs. religion or anything like that! I specialize in how music history was written in the 19th century, right as Darwin’s ideas took hold and revolutionized the way people understood history. There was a common misconception (which unfortunately persists even today) that evolution works toward something, that change is necessarily progress. That’s not how evolution in nature works; it’s an unguided process, and “improvements” are actually advantageous adaptions that might not be useful beyond their immediate environment. Music, however, is not unguided; it’s a human activity that depends on conscious choice. Even so, that doesn’t necessarily mean it’s progressing “toward” anything, either. Music is not better or worse based on when it was written.

Another problem with this presentation of evolution is that it implies a single lineage for all classical music. In biological evolution, we think of species as branches of a tree, not the “Great Chain of Being.” Species may share a common ancestor, but they break off in different directions. Similarly, not all music, or even classical music, can be placed into one evolutionary line. The questions Classic Jenny attributes to her characters (the ones that aren’t nonsense) never applied to all classical music within a particular span of time.

Overall, it’s inherently deceptive to apply the evolutionary metaphor to human activities like music. For one thing, species die out or adapt, so that they no longer exist a million years later other than as fossils. But musical “species” can be revived even after they’ve become “extinct,” if you can even consider music as dead when it’s still actively performed. Biological evolution requires continuity, but ideas don’t. (Here’s a philosophical tangent: Should a Beethoven symphony be considered a fossil or a living creature?)

The comic is well-drawn and very cute, but unfortunately it’s based on a faulty presentation of history and can be too easily interpreted as supporting a white male hegemony. (The “Beats me,” in the final panel sure doesn’t help things, as it makes the last panel seem less philosophical and more clueless.) I’m glad Classic Jenny enjoys making art about classical music, but this comic unfortunately missed the mark.

Addendum: Matt Marks pointed out to me that Classic Jenny (a.k.a. Yunyi Ji) clarified on Classic FM’s Facebook post that she intended the comic to support what I listed as the first interpretation: 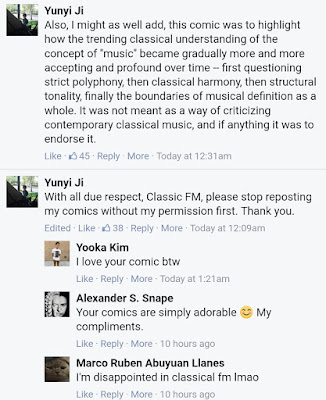 I also think it’s worth noting that she asked Classic FM to stop reposting her comics without her permission, as the enthusiasm for the second interpretation was probably very disturbing.

Source: “The Evolution of Classical Composition” by Classic Jenny
http://classic-jenny.tumblr.com/post/157780315621/what-could-possibly-come-next-tune-in-during-the
Posted by Linda Shaver-Gleason at 9:57 AM